In the past three years, Health Freedom Idaho has grown. HFI has successfully pushed back against liberty stealing statutes and rules, particularly those surrounding vaccines, and in the process made their presence known. Due to this, the media is beginning to take notice.

Ms. Dutton has publicly stated her bias against parents who opt out of some or all vaccinations. She has determined that the vaccination debate is settled despite hundreds of published peer-reviewed studies that call the safety and efficacy of vaccines into question and despite the demonstrable lies and distortions uttered by vaccine proponents. Her opinion is that parents opposed to some or all vaccination are unjustifiably fearful and/or misinformed.

They like to say, “The science is settled. Vaccines are safe and effective.” But is science ever settled? Ask some real scientists and I’m sure they will tell you that science is never settled but is always ongoing. It takes a great amount of arrogance to claim you know it all and there is nothing more to the story.

It also takes a great amount of ignorance given that federal law recognizes vaccines injure and kill some recipients and research shows that 6% of pediatricians do not follow the CDC guidelines for their own children and 13% do not plan to follow the guidelines in the future. A whopping 21% of pediatric specialists planned to reject at least one vaccine for their future children. But most don’t talk about it because they are threatened with the removal of their licenses and harassed by their state medical boards if they do.

Yes, some parents opt out of some or all vaccines for their children and recently their voices have grown stronger as parents educate themselves on the matter and realize their right to direct the upbringing of their children is being threatened all across the nation through draconian legislation and more. Bureaucrats in Idaho have already trampled parental rights codified in Idaho statute.

Why Do Parents Hesitate to Vaccinate?

Ms. Dutton has been emailing Health Freedom Idaho members asking for an interview about their vaccine choices. But why would anyone want to talk with her when she’s already determined that those who decline vaccines are simply doing so out of fear and ignorance. And isn’t a parent’s desire to protect his or her children the most important reason to decline a medical intervention admitted to cause injury and death?

“…many parents in Idaho are opting out of measles/mumps/rubella vaccinations for their children…. The reason they balk usually isn’t religious or because of underlying health problems. It’s fear.”

Audrey Dutton March 8, 2015: “Idaho Parents Increasingly Gun-Shy Over Getting Shots For Their Children.”

One is left to wonder the basis of this assumption and why it matters. A parent has the natural right to care for their child as they see fit. They can choose whether to vaccinate or not – for any reason, or for no reason at all. That said, religion, underlying health problems, documented scientific dangers of vaccines, bad experiences of friends and loved ones, and fear are five justifiable reasons to question whether the potential benefits of vaccinating are worth the risks and spiritual objections. – Health Freedom Idaho

REFUSING VACCINES DUE TO THE TOXIC INGREDIENTS

Let’s examine the description (in part) of the MMR II, made by Merck & Co, Inc.

Certainly Ms. Dutton cannot fault loving parents for not wanting to inject those ingredients into their healthy children. There is not a single study proving the safety of injecting all those ingredients. Is Dutton unaware of this fact? 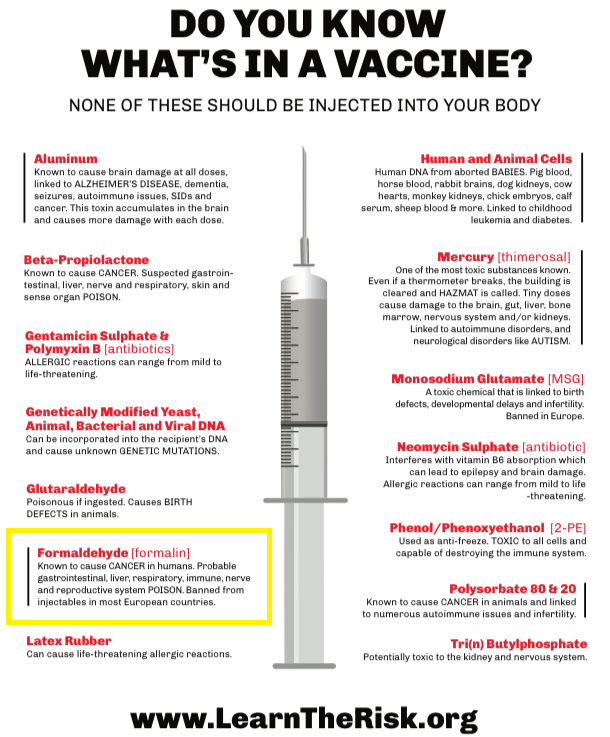 Many individuals believe vaccines are unclean and defile the temple (their body) because of the injection of modified viruses and bacteria, toxic contaminants and ingredients, and the fact they are cultured on aborted fetal tissues and animal tissues.

What do all these ingredients mean to someone with possible spiritual objections? There are at least two answers to this question. One is the issue of abortion. The other is the multiple biblical references to introducing foreign substances into the body.

Wistar RA 27/3 is listed and referenced with WI-38 human diploid lung fibroblasts. These are scientific terms and labels. Here is the reality of what they represent:

“The rubella virus clinically named RA273 (R=Rubella, A=Abortus, 27=27th fetus, 3=3rd tissue explant) was then cultivated on the WI-38 aborted fetal cell line. A later research paper by Stanley Plotkin [vaccine developer]  would reveal that 40 more babies were aborted after RA273 was successfully isolated, with virus strains taken from 34 of them.[13A] This means a total of over 80 separate, elective abortions recorded were involved in the research and final production of the present day rubella vaccine: 21 from the original WI-1 through WI-26 fetal cell lines that failed, plus WI-38 itself, plus 67 from the attempts to isolate the rubella virus.” – Children of God for Life, Vaccines and Abortions.

The second potential religious or spiritual objection relates to foreign substances being introduced into the body. Many believe the Bible commands we not defile the temple God has created.

Alarming research out of Italy documents not only the dangerous ingredients intended to be contained in vaccines but dozens of other toxic contaminants from lead to glass. The independent studies show there are more toxins in these biologics than the CDC is disclosing: https://childrenshealthdefense.org/wp-content/uploads/02-Gatti-2017-New-Quality-Control-Investigations-on-Vaccines.pdf

There are many other sources of information on the toxic ingredients contained in vaccines such as the Centers for Disease Control and Prevention (CDC) for information on vaccine ingredients: https://www.cdc.gov/vaccines/pubs/pinkbook/downloads/appendices/b/excipient-table-2.pdf

The bottom line is vaccines contain a variety of ingredients, both intended and unintended that may toxic, carcinogenic, mutagenic and even fertility impairing  – from aluminum to formaldehyde to polysorbate 80 to more. It is easy to understand how many parents might view these as a violation of God’s commandment.

To address the issues of underlying health problems and fear, let’s look at more information provided by the vaccine maker.

Manufacturers report that there are vaccine reactions that include getting measles from the vaccine…and chronic conditions such as diabetes, arthritis, brain swelling, paralysis (temporary or permanent), seizures, lazy eye and more…

Given all this information, the description, the contraindications, and the precautions, doesn’t some fear seem warranted? And given these risks, does Dutton really think it is her place to declare the science settled, not to mention shame parents for well-placed fear?

REFUSING ADDITIONAL VACCINES AFTER SEEING A LOVED ONE INJURED

This category of people who decline vaccinations, those who were once pro-vaccine only to experience the downside first hand, is likely the largest. Despite the fact that less than one percent of vaccine adverse reactions are reported, there have been over 87,000 reports of adverse reactions to the MMR vaccine to the federal Vaccine Adverse Events Reporting System from the US and it’s territories. And if only 1% of reactions are reported, there could be as many as 8,700,000 reactions.

Despite official reassurances that vaccine injuries are rare, parents who’ve seen their children hospitalized, stricken with chronic illnesses, paralysis, seizures, or blindness are not going to continue vaccinating. Siblings are spared the potential damage and parents are shamed for being anti-vax when they should receive our sympathy. In reality, they were pro-vaccine until they watched their child suffer and/or die. To add insult to injury, parents are shamed and targeted after vaccination injury by friends, family, and media. Many suffer in silence, raising a child with chronic illness or vaccine-induced physical challenge.

Yes, parents opt-out for religious and moral reasons as well as previous vaccine injuries. Others, faced with the decision of vaccination, having read the medical literature to truly understand the risks and being left with many unanswered questions as vaccines are not subject to the gold standard of double-blind, placebo-controlled rigor, they utilize the vaccine exemptions available through Idaho statute.

Exemptions due to the Unanswered Questions

Access to information regarding vaccines has become increasingly difficult due to censorship by big tech and the mainstream media who according to Robert F. Kennedy Jr., received a combined $9.6 billion in revenues from pharmaceutical companies in 2016 alone. Information, statistics and basic risk versus benefit analysis of vaccinations are getting harder to research.

Health officials, doctors, and mainstream media claim that 1 in 1000 children will die from measles but before the introduction of the measles vaccine, the reported number was 1 in 10,000. Thanks to public health measures such as sanitation and clean drinking water as well as access to healthcare and nutrition, the rate declined from 13.3 per 100,000 in 1900 to .2 per 100,000 in 1963, before the measles vaccine was introduced. No children have died from measles in the US in last 2 decades.

Some of the many unanswered questions:

While we are flattered that time and resources are being spent trying to figure out how a small grassroots effort could grow into an outspoken voice of freedom and liberty in Idaho – answer, because we speak the truth and it resonates – these above questions deserve a thorough examination. Is Dutton willing to ask them? What’s more, the only group possessing unfettered influence at the state and national level is the pharmaceutical industry, that is where the focus of investigative reporting should be. Dutton must possess a great deal of cognitive dissonance to believe that the same industry that has paid billions in fines for fraud and is the largest lobbyist and contributor to political campaigns in the nation, is trustworthy when it comes to vaccines even though they have no liability for these products.

Our question is whether an already opinionated journalist like Audrey Dutton is capable of reading the medical literature herself, talking to doctors and scientists with genuine concerns, investigating reported injuries and deaths after vaccines and writing a thought provoking and honest piece of journalism? Or will she simply regurgitate what conflicted officials, doctors, and vaccine stakeholders have fed her? We think educated readers know the answer to those questions.

Our question is whether an already opinionated journalist like Audrey Dutton is capable of reading the medical literature herself, talking to doctors and scientists with genuine concerns, investigating reported injuries and deaths after vaccines and writing a thought-provoking and honest journalism piece? Or will she simply regurgitate what conflicted officials, doctors, and vaccine stakeholders have fed her?